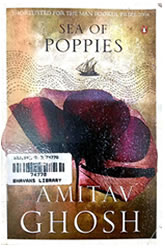 Ibis trilogy is a historical saga set during the outbreak of the first Opium War, fought between Great Britain and China from 1839 to 1842. The first in this trilogy was shortlisted for the Man Booker Prize.
The story is set prior to the First Opium War, on the banks of the holy river Ganges and in Calcutta. The novel interweaves the stories of a number of characters, who all, in the latter half of the novel, find themselves taking passage from Calcutta to Mauritius on a boat named the Ibis. The book traces the records of labour migration from the rural villages of Bengal to Mauritius and raises issues including zamindari system, caste hierarchy, gender discrimination, domination of patriarchy, impoverishment, destitution, exploitation of slaves, racial problem, etc.
(823(54)/GHO/74770)

Set in September 1838, book two in the trilogy, follows fortunes of people from Ibis and other ships who reach the harbours of China after facing a seastorm. The novel has characters from various cultural and geographical backgrounds whose common interest is trade with China.
(823.081(54)/GHO/74767)

Following the storylines of the previous two parts, Sea of Poppies and River of Smoke, the story continues in 1839. The novel was shortlisted for the Hindu Literary Prize and the Crossword Book Jury Award in fiction in 2015.
(823.081/GHO/78690)

The book, set in Calcutta and New York, is a medical thriller that dramatizes the adventures of people who are brought together by mysterious turn of events. The book is loosely based on the life and times of Sir Ronald Ross, the Nobel Prize–winning scientist who achieved a breakthrough in malaria research in 1898. The historical facts regarding malaria research are interconnected to create a story in three different times.
(823.54/GHO/84475) 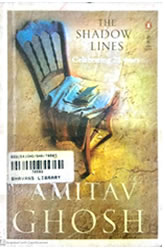 This is a Sahitya Akademi winning novel that captures perspective of time and events, of lines that bring people together, lines that are visible or non-visible. The novel is set against the backdrop of historical events like the Swadeshi movement, Second World War, Partition of India and Communal riots of 1963-64 in Dhaka and Calcutta.
(823(54)/GHO/SHA/78593)

The Hungry Tide is a rich, exotic saga set in Calcutta and in the vast archipelago of Sundarbans islands in the Bay of Bengal. There is a terrible, vengeful beauty here, a place teeming with crocodiles, snakes, sharks and man-eating tigers. The Hungry Tide is set in the world’s largest mangrove ecosystem - the Sundarbans, which comprises both water and earth and the intersection of landscape, water, human beings and their culture.
(823.0872/GHO/HUN/77090)

The Glass Palace is a historical set in Burma, Bengal, India, and Malaya that spans a century from the Third Anglo-Burmese War and the consequent fall of the Konbaung Dynasty in Mandalay, through the Second World War to late 20th century. This is a superb story of love and war which begins with the shattering of the kingdom of Burma, and it goes on to tell the story of people, fortune, a family and its fate.
(823.83/GHO/GLA/75812)

8.The Circle of Reason

Ghosh’s debut novel (published in 1986) centers on Alu, an orphan enlisted by his foster father as a soldier in his crusade against the forces of myth and unreason. Suspected of terrorism, they are about to be arrested when a tragic accident forces Alu to flee his village. Pursued by a misguided police officer, Alu finds his way through Calcutta to Goa and to Africa. The book traces Alu’s journey across two continents.
(823.54/GHO/HUN/84474)

9. The Great Derangement: Climate Change and the Unthinkable

Are we deranged? The acclaimed Indian novelist Amitav Ghosh argues that future generations may well think so. In this book, Ghosh examines our inability at the level of literature, history, and politics to grasp the scale and violence of climate change.
(809/GHO/80201)