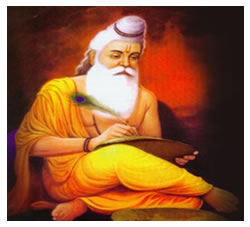 Sanskrit was considered as "Deva Bhasha", "Devavani "or the language of the Gods by ancient Indians. Sanskrit which was once the language of munis and rishis is now attracting the modern world in such a way that experts are of the opinion that Sanskrit is the best language for use with computers. Sanskrit is a scientific and systematic language. Sanskrit literature is easily the richest literature in the history of mankind.
Sanskrit is the mother of all languages. It is one of the 23 official languages of India. Sanskrit is also known as a classical language of Indian and the liturgical language of Hinduism, Buddhism, and Jainism. The classical language of India brought to us by the Aryans, and also one of the oldest languages of the world. There’s a whole corpus of classical literature, the earliest being the Rig Veda of 1500 BC.
The word "Sanskrit" means "refined", "consecrated" and "sanctified". It has always been regarded as the 'the most pure' language. It is known for its clarity and beauty. Sanskrit is the oldest and the most systematic language in the world. It has always been regarded as the 'sacred' language of Hindus and still continuous to be the only language used in holy functions and ceremonies of Hindus.
The word sanskrita, meaning "refined" or "purified," is the antonym of prakrita, meaning "natural," or "unpurified." It is made up of the primordial sounds, and is developed systematically to include the natural progressions of sounds as created in the human mouth.
History of Sanskrit Language:
Sanskrit is one of the oldest known languages over thousands of years. It is also called "Deva Vani" (the language of gods) as it is said that Brahma introduced this language to the Sages of celestial bodies. It is believed that the Sanskrit language came from Indo-European language family of Indian subcontinent. It was only in the 18th century, a similarity between Sanskrit, Latin and Greek was found which made the think tanks of the world to study and discover the relationship of all Indo-European languages.
Sanskrit is indeed a perfect language in the same sense as mathematics, but Sanskrit is also a perfect language in the sense that, like music, it has the power to uplift the heart. Why has Sanskrit endured? Fundamentally it generates clarity and inspiration. And that clarity and inspiration is directly responsible for a brilliance of creative expression such as the world has rarely seen.
Since the late 19th century, Sanskrit has been written mostly with the Devanāgarī script. However it has also been written with a number of other scripts, including the Brahmi, Kharosthi, Sharda and Siddham.
Since the late 18th century, Sanskrit has also been written with the Roman script. The most commonly used system is the International Alphabet of Sanskrit Transliteration (IAST) [ i.e. Roman script with diacritical marks], which was been the standard for academic work since 1912.
Vedic Sanskrit was the earliest form of sanskrit language. The Vedic literature comprise of Samihita (text of Ridveda, Yajurveda, Sāmaveda, Atharvaveda), Brāhmana, Āranyaka, Upanisad and six Vedāngas Viz. Siksā (Phonetics), Vyākarana (Grammer), Nirukta (Etymology), Chhandas (Metrics), Kalpa (Ritual), Jyotisa (Astrology).
Sanskrit Literature
Sanskrit literature comprise everything i.e. religion, philosophy, grammar, phonetics, etymology, lexicography, astronomy, astrology, sociology, sex, politics, art, architecture, aesthetics, creative writing, scientific writing, historical writing, epigraphy etc.
The two epics viz. Rāmāyana and Mahābhārata, 18 Mahāpurānas, 18 Upapurānas, Dharmaśāstra all are in Sanskrit. Buddhist religion and philosophical works are also in Sanskrit.
The Foremost Sanskrit Works
Sanskrit creative writings comprise of śrāvya kāvya (Poetry) and Drsya kāvya (Dramas).The great Sanskrit poems are five – Kalidasa’s Raghuvamsa and Kumarasambhava, Kiratarjuniya of Bharavi (550AD), Sishupalavadha of Magha (7th century AD) and Naishadhiyacharita of Sriharsha (12th century AD). All of them draw from the Mahabharata, the source for many writers even today. Shorter poems of great depth were composed on a single theme like love, morality, detachment and sometimes of grave matters. The earliest and best collections of such verses called Muktakas are those of Bhartrihari and Amaruka. Bhāsás 13 plays, Aśvaghosás creative writings, Kālidāsás 4 plays, Vishakhadattás plays, Shudrakás play, Bhavabhutiś 3 plays are important works.
Much of the early prose work in Sanskrit has not survived. of the remaining, some of the best are Vasavadatta of Subandhu, Kadambari and Harshacharita of Bana (7th century AD) and Dasakumaracharita of Dandin (7th century AD). The Panchatantra and Hitopadesha are collections of wit and wisdom in the Indian style, teaching polity and proper conduct through animal fables and aphorisms.
Sanskrit language is like an ocean. The stream of Sanskrit literature flows constantly even in 21st Century, Sanskrit literature flourishes.
The Quotations:

"Sanskrit is a language amazingly rich, efflorescent, full of luxuriant growth of all kinds, and yet precise and strictly keeping within the framework of grammar which Panini laid down two thousand years ago. It spread out, added to its richness, became fuller and more ornate, but always it stuck to its original roots. The ancient Indians attached a great deal of importance to sound, and hence their writing, poetry or prose, had a rhythmic and musical quality. Our modern languages of India are children of Sanskrit, and to it owe most of their vocabulary and their forms of expressions."Jawaharlal Nehru

“If I was asked what is the greatest treasure which India possesses and what is her greatest heritage, I would answer unhesitatingly that it is the Sanskrit language and literature and all that it contains. This is a magnificent inheritance, and so long as this endures and influences the life of our people, so long will the basic genius of India continue.” ...India built up a magnificent language, Sanskrit, and through this language, and its art and architecture, it sent its vibrant message to far away countries.Jawaharlal Nehru

"The Ancient and classical creations of the Sanskrit tongue both in quality and in body and abundance of excellence, in their potent originality and force and beauty, in their substance and art and structure, in grandeur and justice and charm of speech and in the height and width of the reach of their spirit stand very evidently in the front rank among the world's great literatures.”Sri Aurobindo

"Without the knowledge of Sanskrit, nobody could become a truly learned man. Only in India could such a language take shape and flourish. Unfortunately, Government does not realise what a national treasure this language is; this reminds one of the Sanskrit saying which means "a monkey cannot value the gift of a necklace of pearls". Mahatma Gandhi