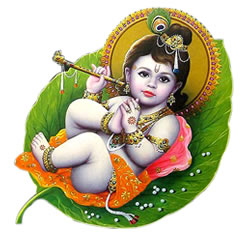 Janmashtami, one of the most popular festival of Hindus. They celebrate the birth of their beloved God, Shri Krishn on the eighth day (Ashtami) in the month of Shravana. Lord Shri Krishna was born on the 'Rohini' nakshatram (star). It is generally celebrated in the month of August-September. Krishna is the most popular deity throughout the whole of India and is considered as the eighth Avatar or incarnation of Vishnu, one of the Hindu Trinity. Legend has it that Shri Krishna was born on a dark, stormy and windy night to end the rule and atrocities of his maternal uncle, Kansa.
Birth of Shri Krishna:-
It is only at midnight between the first and the second day that birth of Shri Krishna took place. The actual festivities begin during midnight in this 48 hour period. The celebration reaches its peak at midnight, with the birth of Lord Krishna, with lot of hymns, arati taking place and blowing of the Conch (shankh), rocking the cradle of Lord. The idol of Lord is bathed with Panchamrita (A mixture of milk, ghee, curd, honey and Sugar). The Panchamrita is later distributed as Prasada to the devotees along with other sweets. While some Fast on the first day and break it at midnight for others the fasting continues for both days. Temples and homes all over India display jhankis (tableaux) showing important incidents from the Lord's life.
The Celebrations
Celebration of Janmashtami, birth of the famous Lord Krishna includes a number of ceremonies like, Rasalila, Jhankis (tableaux) etc. Dahi Handi is a popular ceremony, celebrated with lot of enthusiasm and glee. Dahi Handi is an enactment of Lord Krishna's efforts to steal butter from Matka (earthen pot) suspended from the ceiling.
Ceremony of Dahi Handi
Dahi Handi generally takes place on the second day of Janmashtami. An earthen pot containing a mixture of milk, dry fruits, ghee is hung around 20-30 feet high in the air with the help of a rope. Silver coins are hung along with the rope,which are later distributed as prize to the winners. Enthusiastic young men, form a human pyramid by standing one on top of the other, trying to break the pot. Onlookers throw water on the young men in order to prevent them from breaking the pot. Breaking of the pot is followed by prize distribution. Devotees believe that the broken pieces of earthen pot will keep away negative powers from their homes.
Dahi Handi is celebrated with fervor, especially in the twin cities of Mathura - Vrindavan, Dwarka and Mumbai. Young men in Mumbai yell 'Ala re ala, Govinda ala' during the ceremony.
An extremely euphoric atmosphere prevails in different cities of Maharashtra during the festival. The city of Mumbai experiences lot of enthusiasm among young men and boys who carry out the Dahi Handi ritual every year at various places.
Rituals and Customs of Janmashtami
Janmashtami festival witnesses many interesting customs and rituals in various states and cities of India. While some rituals are common to all, others are unique and restricted to a particular region or city. These customs and rituals are followed religiously by all the Lord Krishna devotees year after year.
Rituals and Customs Observed during Janmashtami
Fasting: The most common ritual observed all over during Janmashtami is fasting by devotees on the day of the festival. Devotees fast for the entire day and break it after the birth of Lord Krishna at midnight. People prefer to have only milk and milk products as they were the favourite of Lord Krishna. Some devotees of Lord Krishna go to the extent of keeping 'Nirjal' fast- It involves fasting without having a single drop of water. There are other ardent followers, who keep the fast for two days in the honour of Lord Krishna.
Chanting:
Devotees indulge in continuous chanting all day long. They chant mantras and shlokas to please the Lord. Religious atmosphere prevails everywhere. Devotees highlight his feats and his divine characteristics. Chanting of 108 names of Lord Krishna is another ritual that takes place in various temples. Chanting of names is accompanied by showering of flowers on the idol of Lord Krishna.
Devotional Songs and dances
Another popular ritual is singing of songs (bhajans) in the praise of Lord Krishna. Bhajans are an important custom of the midnight celebration during the festival. Dances are also performed by devotees depicting the various events of Lord Krishna.
Preparation of Sweets
According to legend, Lord Krishna was very fond of milk and milk products like butter and buttermilk. He was also fond of Sweets like Kheer, Pedhas etc. Therefore devotees all over make sweets during the festival to please the Lord.
Performing Rasaleela
One of the most important aspects of the festival Janmashtami is Rasaleela. Rasaleela is a divine sport (Kreeda), which Shri Krishna played with his gopis on the banks of river Yamuna in Vrindavan. Radha was the closest one to the Lord. Her love for Lord Krishna was complete and in its purest form. Shri Krishna was ten years old when he performed Rasaleela. Rasaleelas are particularly performed in the city of Vrindavan.
Teachings of Lord Krishna
Lord Krishna, is the one of the most loved Gods of the Hindu religion. His teachings on various aspects of human life to Arjuna during the epic battle of Mahabharata are world famous. His teachings were written in form of a book by famously known as Bhagwad Gita. Bhagwad Gita literally means divine songs of Lord. Teachings of the lord, are relevant even in the present age. They are being promoted by a number of spiritual gurus. Few of his important teachings are as follows: